About the artist and Evolutionary Art

"Art that is aesthetically beautiful is extremely important. but effective fantasy art should stimulate thought as well. When my work achieves these objectives. it's successful." The work of Fritz Smith, in pen and ink, photography, and sculpture does just that. While Fritz is not one to guard the secrets of his inspiration, he is quite interested in the individual's involvement in his work. Call it avant garde, call it surreal, or call it abstract. For Fritz the labels just don't stick. After twenty years' work his art continues to change, and so Fritz has coined his own term: evolutionary art.

The colorful and intricate pen and ink work of Fritz Smith often contains floating, fluttering "characters." These unique animals, birds, and assorted creatures are filled with a highly detailed rendering that is somewhat reminiscent of Byzantine mosaics. Though the shapes and profiles are recognizable, Fritz's energetic abstractions are filled with detail that denies identification. His confident, yet delicate creations seem to taunt one: "Look closer, find something you recognize. I dare you!"

To achieve such stunning color and detail Fritz has researched and formulated his own pigment mixes. Fritz found that colored inks commercially available do not have the saturation necessary to work in great detail. Though Fritz knew pigment color was the solution, finding a reliable source for pigment based color proved to be just as difficult. With much experimentation, Fritz created a formula that gave him the vibrant, dense color that he needed, but he was faced with one remaining problem. The pigments, though properly mixed, were so dense that they would quickly separate. To solve this dilemma Fritz engineered an electric turntable to keep the pigment bottles in motion. The bottles are kept rotating at a 10 degree angle, 24 hours a day. This technique has proven to stretch the life of a mix of pigments by many weeks.

Many of the fantastic creations that inhabit Mr. Smith's pen and ink work find their way into his photocompositions as well. In many of Fritz's monochromatic photographs, the figures float in space, as though they exist in a secret dimension visible only to the viewer. To contemplate Fritz's photocompositions is to visit a place where mystical events seem to occur regularly. Though Fritz's photocompositions and pen and ink work are composed primarily of abstract elements, his sculpture integrates realism and abstraction together. Biomoiphic forms become a background for juxtapositions of geometric elements. Glass, bronze, marble and wood all play a role in assembling Fritz's vision of fantasy amidst the human form.

Fritz Smith has found fantasy to be a liberating subject in all his work, yet he feels realism plays an important role in his art as well. "You have to know the rules before you can break them" says Fritz. The use of realism in all of Smith's work is a very necessary element: " It is not just the element that people relate to, often it is their entry point into the piece." Be it pen and ink, photo illustration, or sculpture, Fritz's free form art is a highly accessible, yet unique vision. Contrasting reality with fantasy and the familiar with the obscure, Fritz Smith creates art that is both beautiful in its intricacy and stimulating in its depth.;

Art — the name given to that magical combination of form, color, content and movement which possesses the ability to at once fascinate us, disturb us, inspire us, and to ignite within us passions of which we are often wholly unaware.

Historically, society hasn't recognized great works of art or the creators of that art until the creators have passed into the great beyond. Then, as tradition would have it, the endless analyses of the artist's life and the meaning of his work begins… "What did he really mean by this piece?" … "The use of such-and-such a color surely reflects chaos and/or anger during that period of his life."

And so the infinite speculation goes. Art critics appear to feel certain that if they just search long enough and hard enough; if they delve into the most intimate details of a given artist's life, then the ultimate meaning of his works will emerge, and somehow those observing his art will be transformed. Well, at least one Orange County artist whose work has drawn considerable attention from Orange County residents gives all those seekers of ultimate-truth-in-art reason for pause.

This writer decided not to wait until such artist — namely, one Fritz Smith of Huntington Beach — because history before finding out the meaning behind the artist, his art work, and the inner workings of that ever-mysterious "creative process."

Smith's work would be described by some observers as avant-garde in style; others see it as surrealistic. Smith himself is likely to tell you that his work is abstract. His specialties include pen and ink/color photograph combinations, sculptures, and unique mergers of wood, marble and photography. Generally, his photographic pieces are characterized by vivid, intense colors, abstract shapes, and graceful movement.

But whatever one chooses to call Smith's work, one thing is certain: an observer of that work isn't likely to walk away from it — without pausing for at least a second look. The observer may walk away scratching his head, or murmuring an educated-sounding "Hmmmmmm… Ah, hmmmmmmmm…" or perhaps even a put-off "Hmph!" But in any case, the observer will in all likelihood be moved to thought.

Most who observe Smith's work also end up turning the work sideways, upside-down, and every which way in order to get a clearer perspective of it (a phenomenon observed during his October art show in Huntington Beach). Some even appear to shake the photographs, as if in hopes of all the elements rearranging themselves to spell out the meaning of the work for them.

This writer admits to doing much the same thing in my probing of Smith's brain for answers to the whys and hows of the creative process — the "truth" about "artistic inspiration" and about Smith's work. Like those observing his art, I tended to look at Smith himself upside down (intellectually-speaking, of course). I caught myself turning my head sideways at least a dozen times and finally, I even resorted to Devil's Advocate tactics in a furious attempt to force him to divulge the true rneaning behind his works. Just as one observing Smith's works would swear for all the world that the meaning therein is deliberately eluding you, I was swearing to myself that Smith himself was being elusive about his work during the interview.

Fortunately at some point during the interview, I remernbered something a Greek philosopher once said: "A good teacher teaches people what to think; a great teacher teaches people how to think!" Interestingly, the word abstract is defined as "insufficiently factual; having a sketchy outline." In keeping with such definition, Smith will tell you everything you want to know about the technical aspects of his work. "I use the finest materials, the purest colors, and the best tools available in my work, he explains. Divulging the form of his work is his pleasure; but explaining or defining the content is where he clearly draws the line.

"A lot of people are afraid to say what they see in a work of art. They're afraid other people will make fun of them or say things like, 'Hey, you' re crazy if you see that.”

Smith believes that the pressure to conform causes people to lose one of their potentially greatest allies — their imaginations. Recently of course, behavioralists and physiologists have discovered the amazing potential of the human imagination to aid in promoting physical and mental health within the self.

The element of fantasy within Smith's work gives him hope that he can perhaps rekindle the fires of imagination within individuals. "Fantasy is a message with everything I do," he says. "Everyone is living in a fantasy, really. "But when you see it in my work, you see the fantasy you want to see. Then, you realize you' re living a fantasy. Before I draw something, it's just a fantasy, but the minute its drawn, it becomes a reality."

But just what is that creative process that must transpire before any work of art becomes a reality? "I really don't feel I have a control over the finished product," says Smith in relation to the creative process. "I start out drawing a line and I may turn the work sideways, and upside down, and end up working on it from every angle. When I start a piece, I don't know where I'm going with it. I really don't understand what I'm doing at the time.

"It's magic when a piece works — when it's visually exciting — that 's magic to me."

"The only thing I have above most people is that I know what I have to do — that's rare in this time for mankind — in the 20th century, where man is alienated from even himself."

Is he espousing the adage that to be an artist one "has to suffer"? "No," he says. "I have found that I can work when I'm hungry, sick and poor, but what comes out in my work is hunger, sickness and poverty.

"I feel a side benefit of being an artist is that you get to make people feel good. If I can encourage people to use their imaginations, it makes me feel good." 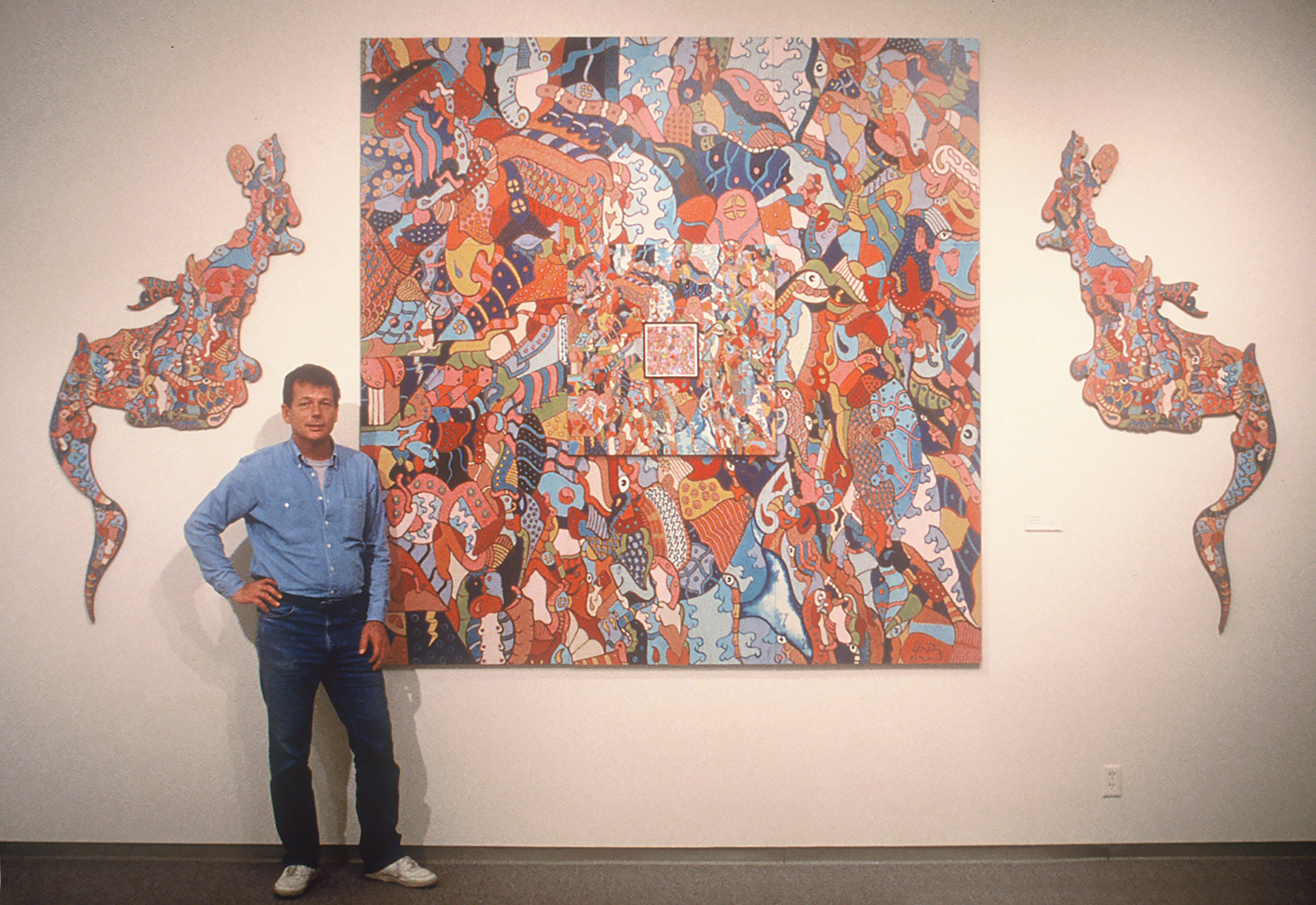 design, polizzi creative is based in San Diego and is your contact point to purchase a single pen and ink piece, a full series of Cibachrome prints, or perhaps the investor interested in Fritz's full catalog.   contact carlito

The 8 x 10 Cibachrome prints have been well stored, but some of the pen and ink pieces have a bit of background discoloration, although no UV damage after 25 years in storage.
We are in San Diego and the artist would be met in Huntington Beach, CA if you are in the area and wish to visit, by appointment please.
Availability and pricing are subject to change; packaging and shipping in the Continental United States is included. Outside CONUS, we will find a way together.

©2016 Artist Fritz Cramp Smith, all rights reserved. ALL ANALOG: made before Photoshop with imagination.